ScottsEnglish Administrator Posts: 1,289 admin ✭✭✭✭✭✭✭
December 2017 edited May 2020 in IELTS Test
Try and write an answer to the question below.  When you have finished, compare your answer with our sample answer (below).

The graph below shows the consumption of fish and different kinds of meat in a European country between 1979 and 2004. 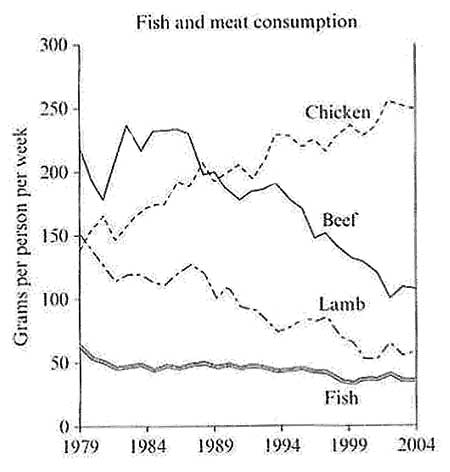 For another example of fluctuation and help with additional essential words for these types of questions, have a look here.

The line graph shows information about the amount of chicken, beef, lamb and fish eaten in a European country.  The period begins in 1979 and ends in 2004.

Overall, chicken was the most popular meat consumed over the period.  It began at quite a low level - around 150 grams per person per week (gpw) - but recorded a strong upward trend, finishing at 250 gpw.

Fish started at around 60gpw in 1979 and remained stable throughout the whole period – finishing at around 40gpw in 2004.

In summary, it is clear that chicken was the most popular meat consumed followed by beef, lamb and fish.