ScottsEnglish Administrator Posts: 1,248 admin ✭✭✭✭✭✭✭
May 2016 edited May 2016 in Vocabulary

Do you know the difference between affect and effect?

Students often make mistakes with these two words - because they sound similar and their spelling is also very similar.

Here's how to remember affect: affect = to influence

If I influence you, I also affect you.  So, we see that affect is a verb.  Consider these examples:

Now, what about effect?

Here's how to remember effect: effect = result or outcome.  In most cases, it is a noun.  Consider these examples: 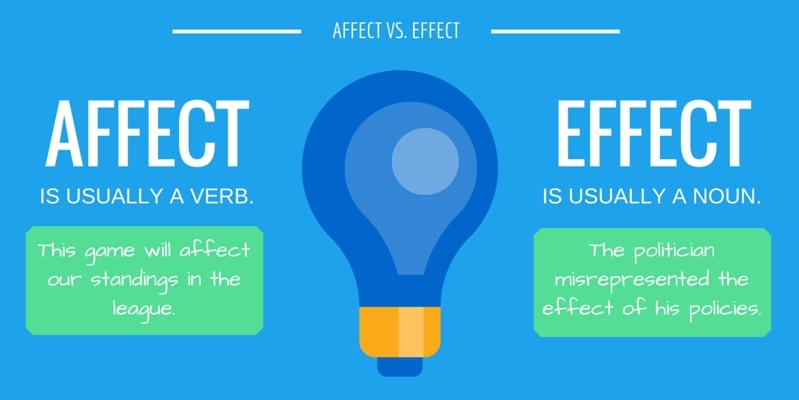 Now, complete these sentences with the correct word.

A. affects
B. effects

3. What ____ has the popularity of shopping centres had on your hometown?

4. The reduction in salary may ____ the living standards of people in the village.

A. affected
B. effected

1. The fall had a big effect on my memory during high school.
2. The television affects how knowledge is passed on.
3. What effect has the popularity of shopping centres had on your hometown?
4. The reduction in salary may affect the living standards of people in the village.
5. The conversation affected me deeply.